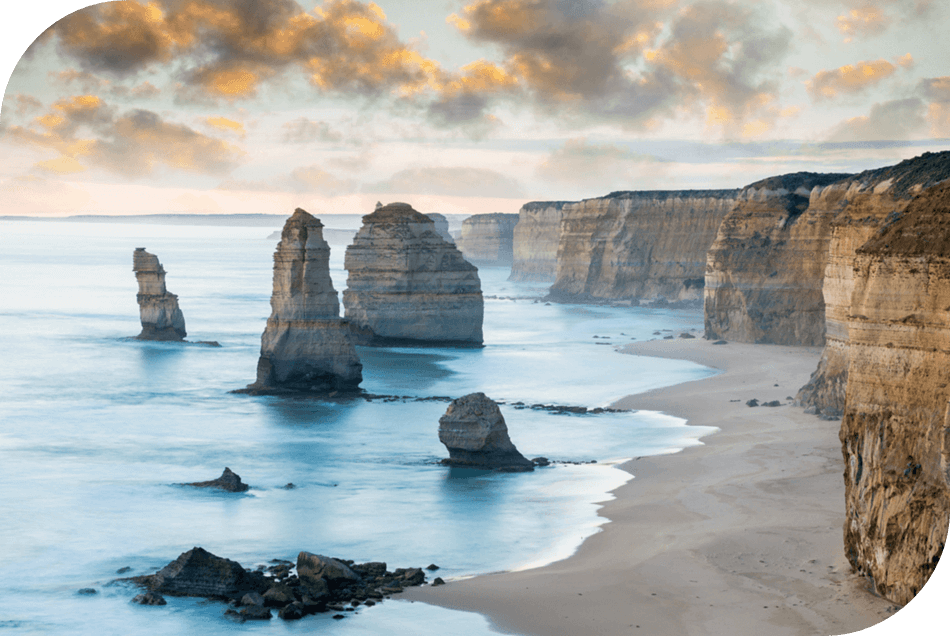 With plenty of places to stay along the famous Great Ocean Road, a few days spent would be ideal. Our 3-day itinerary gives the low down on everything to see on your way to the 12 Apostles.

Once at the 12 Apostles, there is more to do than view the limestone rock stacks. Walk on the beach below the cliffs and explore a little. Try to allow enough time to relax in the Port Campbell National Park, before heading back to Melbourne or onwards.

What’s in a name?

Early records show that the area was first referred to as the ‘sow and the piglets’. Mutton Bird Island at Loch Ard Gorge was the sow and the smaller rock stacks nearby were the piglets. The formations now, of course, are known as the 12 Apostles, they are not individually named and cannot all be seen at one time.

Dozens of buses and smaller tour vehicles navigate the Great Ocean Road every day, the prime viewing time at the 12 Apostles is around 2-3pm. Visitor numbers have increased massively in the past decade or so and it does get really crowded.

Exploring all the nooks and crannies…

Assuming you are approaching from the Melbourne direction:

A tiny wee village, not far from the12 Apostles, etc. Pop in and take a stroll on the boardwalk in Princetown. It connects the town to a picnic area and fishing area near a bridge over the Gellibrand River. Kangaroos can be seen on the river flats from the viewing platform in the Princetown. It also connects to the Great Ocean Road Walking Trail.

A sweet little fishing village, Port Campbell has plenty of accommodation and cafes. The beach is the only safe one to swim on, remembering to stay between the flags and swim when it is patrolled. This is an ideal village to stay while exploring the area.

From the end of the beach, a walk goes up and along the clifftop. Only accessible when the tide is low.

Quite a small car park at this spot, well worth a walk down to see, though. Late afternoon sunshine often creates a beautiful glow on the rocks and the 12 Apostles can be seen way off in the distance on a clear day. Days of high seas create such a dramatic scene and it is easy to see how the rocks erode from the constant battering they receive.

Yep. London Bridge fell down. Decades ago, this area had no boardwalks or fences, visitors could park right by each viewpoint and enjoy nature at its finest. Times have changed of course and the huge numbers of visitors make it imperative to ensure safety and prevent as much foot traffic erosion as possible.

A short walk of about 700 meters leads to the Grotto. An open cave formation that will often have beautiful reflections in the pool of water beyond it at low tide levels.

Bay of Martyrs & Bay of Islands:

Both these areas deserve a visit, especially for people traveling on towards Warrnambool. The formations and cliffs are nowhere near as high as those of the 12 Apostles, but they do have a charm of their own and are a beautiful place to be at sunset.

A few days could easily be filled wandering the trails and exploring the beaches in the National Park. Port Campbell offers camping, youth hostel, B&B’s, holiday units and a motel.