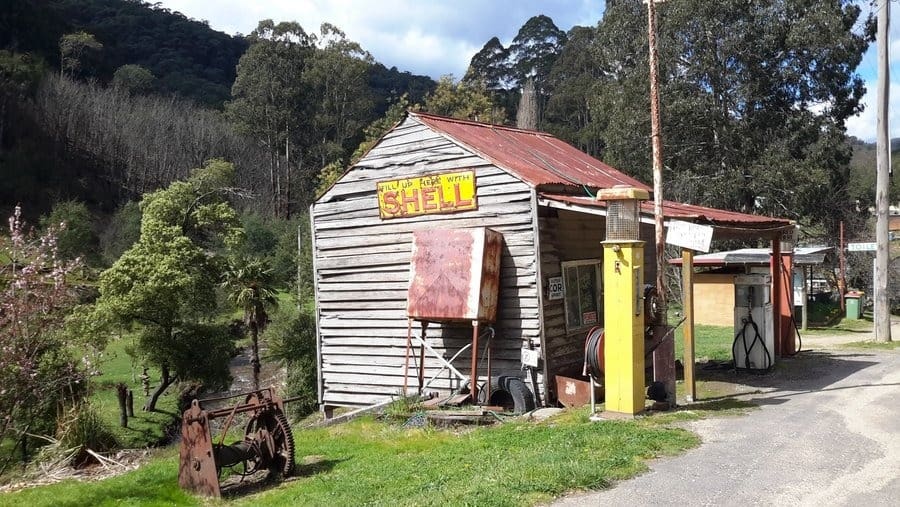 Driving from Licola over the high country road to Jamieson, then down to Woods Point, we saw no other vehicles for the full 91km’s (about 4 hours drive). Being early in the season the road had not long been officially opened as it is closed due to snowfalls from the first weekend in June till the first weekend in November.

One large tree was down along the way and, at first glance, it looked like we would have to return and scoot home the way we had come. Fortunately, there was an opening that had been cut and we passed through without calamity, it also gave the kids a chance to climb a massive eucalyptus tree – even if it was horizontal!

The road is unsealed most of the route to Jamieson, but still fine for regular cars as long as they have a reasonable amount of clearance.

Free camping is available along the way, not far from Mt Skene and numerous walking trails can be seen heading off at various points – collect a map and walk notes if intending to do any hikes up here.

Mt Skene is the highest point on this drive at 1570 metres. We stopped here for a picnic at a classic old wooden table that had suffered the ravages of bush fires that last went through this area during Black Saturday, February 2009.

The girls found some late snow by the side of the road and made some little ‘snow peeps’ on our dining table and even had a brief snowball fight with their Uncle.

The views across the high country are superb from this vantage point, sad to see the scarring and dead trees from the fires, but it is amazing how the forests regenerate. We still had snow on the Alps, Mt Buller is in the distance.

Jamieson is a classic little town by the Goulburn River with a caravan/camping park and a number of B&B’s. No supermarket, but a small store selling provisions and the petrol station has a few odds and ends for camping on sale as well as fuel – and a very friendly Irishman at the pump on the day we passed through.

Further north near Mansfield, is another lovely free camping spot with a good walk up Mt Timbertop.

After grabbing coffees and goodies for the kids, we went south a few km’s on the Woods Point Road to an area we had camped at over the New Year weekend a while back. Skipton Reserve is an excellent area to camp, well maintained with easy access to the river for swimming, fishing, chilling… Long drop toilet facilities, fire pits and tables. Luxury!

A good number of free camping areas can be found all along this drive, most with access to the river.

The kids climbed trees, found marshmallow sticks and played in the river while their Uncle fished to his hearts content (fly fishing).  I was wistfully thinking that the swing chair would have been ideal strung in the tree overlooking the river so a person could relax in and contemplate the meaning of life or whatever floats the boat at that moment in time.

Campfire dinner that night was amusing with an assortment of the odds and ends we had left over at this point, cannot even recall what we had – but who cares!

This is one of my favourite drives in Victoria (I have a few). It is a classic step back in time and has not suffered the indignity of being spruced up for tourism. Relics of the gold mining boom in the area during the 1800s plus somewhat ramshackle old miners cottages and an unpretentious aura make this drive such a delight.

Woods Point began with a general store built by Henry Wood, to service the miners around the Morning Star Reef. The Post Office that still operates today, opened in December 1862. Three years after the discovery of the gold reef, Woods Point had become a thriving town with 36 hotels.

Mining declined during the 1870s to 1890s, and the population dwindled.  Much of the little town had to be rebuilt following devastating bushfires in 1939. The Morning Star Mine continued operations until its closure in 1963.

2011 saw the re-opening of the Morning Star Mine! This video takes us underground and describes how the gold occurs…

A campsite is close to the town, free to camp, with toilet facilities available too. The local Woods Point Hotel has some accommodation and meals, plus a few B&B’s operate.

Heading out of Woods Point, we stopped by another small waterfall and filled our flasks and bottles with chilled mountain water again.

About 30 mins from Woods Point is the junction where you can choose to drive towards Noojee and West Gippsland or continue towards the Marysville/Warburton junction. We headed on to Marysville, simply because we had not passed through there in a while.

If heading to Melbourne it is roughly the same distance whether driving via Warburton or Marysville – if you want to see both towns, then drive on into Marysville and continue towards Melbourne, but turn off on the Acheron Road which will take you through to Warburton.

The drive down into Marysville looks almost surreal in places as the devastation from the Black Saturday fires in 2009 can be clearly seen. Thousands of dead trees, but with so much new growth too. Marysville was one of the worst affected areas during the fires, with a tragic loss of many lives.

Marysville is a pretty little town. Stop awhile and maybe stay overnight in a B&B or the local campground (fees). Eat out in the town or make use of the free BBQ’s by the awesome playground.

A short drive out of town passes by Bruno’s Art & Sculpture Garden and onto the Stevenson Falls. Bruno’s was quite badly damaged by the fires too, but he has masterfully rebuilt his beloved sculpture gardens. They are definitely a place to visit and see the humour at every turn.

If completing the route of Part 1 and Part 2 of this trip, you will have covered some of Victoria’s most varied countryside and gone well off the usual tourist trail. Many Victorians would have never heard of these areas, let alone driven through and experienced them.

Read Part One of this Trip…

Have you toured the Victorian high country? Do you have any tips or advice to share in the comments section below perhaps?