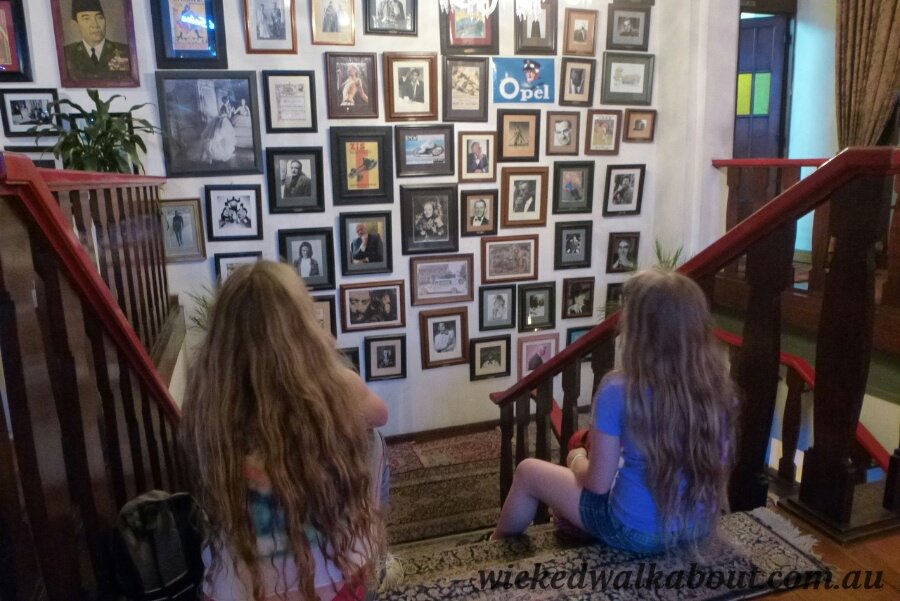 We flew out of Australia to the U.K via Jakarta airport on Christmas Day, listening to carols during the flight and being welcomed outside the airport by a Christmas tree, with fluffy ‘snow’ and all. An unexpected vision, I must admit! 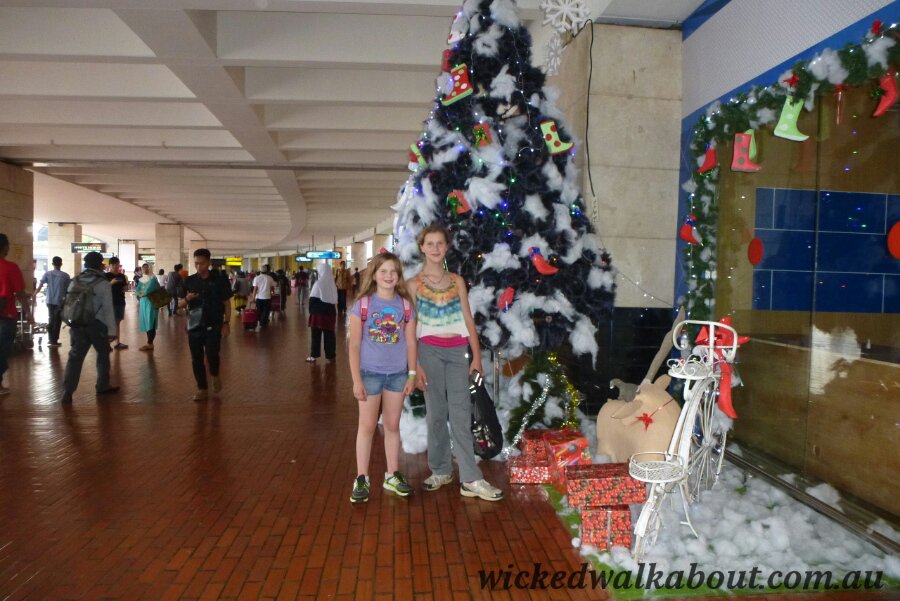 Trip Advisor reviews about what to do during long Jakarta Airport layovers did not sound inspiring.  Most recommendations included going to a shopping mall… Yeek!

That was not an enthralling suggestion, as it does not seem a good way to see any city.

BUT… the FXMall in Jakarta seemed to be an exception because we had children with us too.

The FX Mall, in the Senayan district of Jakarta, has a super slide within the complex, called Atmos-Fear!  It is not a huge mall, but the slide is super! 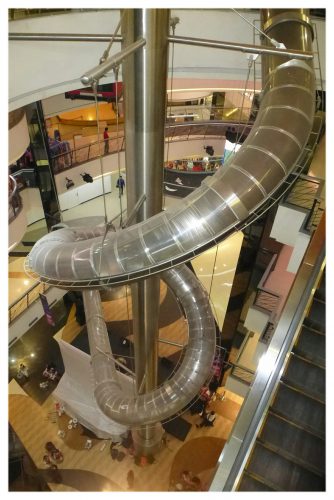 We took a taxi to the Mall but were sad to find the slide was closed. It was Christmas Day, but I had hoped it would be open anyway. After eating at the Mall, we hailed another Blue Bird Taxi and went to visit Cafe Batavia.

Cafe Batavia is a lovely, 200-year-old building, set on the corner of Fatahilah Square and is a prime example of Jakarta during the colonial era.

In 1990 it became an art gallery before being transformed into Cafe Batavia in 1991 by an Australian named Graham James. Photos adorn the walls of famous folk who have visited the cafe. Prices are not low, but not excessive, and it is worth the visit to this old area of town if you find yourself in the city during a layover.

The holiday crowds in the square outside the Cafe created a great atmosphere with mini carnival rides for tiny kids that were powered by a bicycle, street performers. and market sellers. We wandered for a while before hailing another Blue Bird taxi back to the airport and our flight onwards to London. 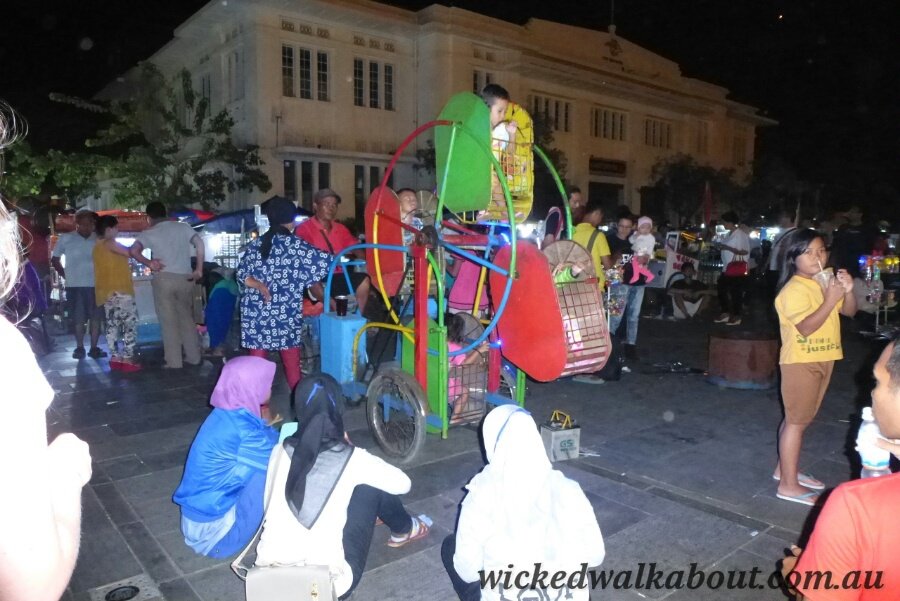 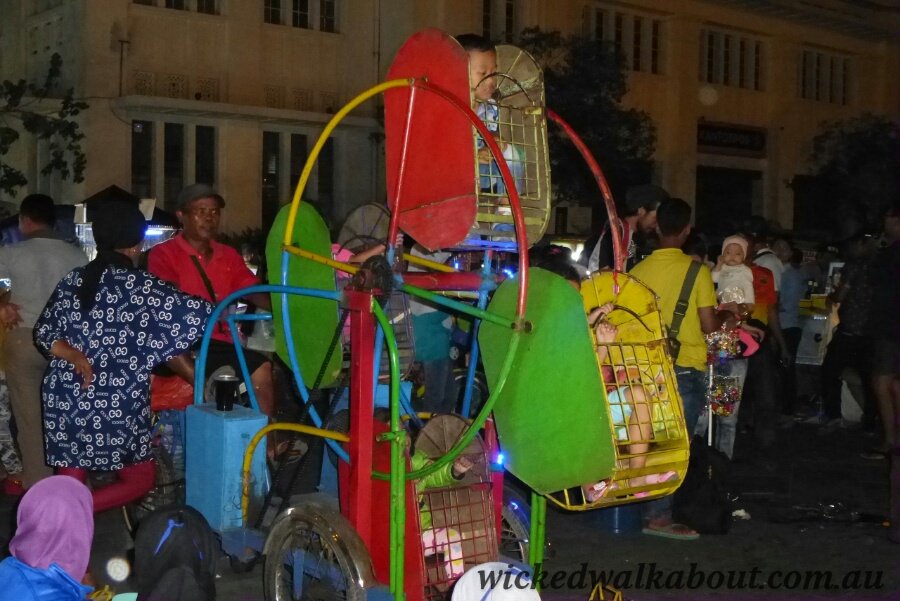 A few tips if visiting Jakarta on a layover with kids:

Buy your Visa online before arrival preferably, as this will avoid a long wait in the queue on the day.

Taxis are cheap, grab a Blue Bird or similar taxi from outside the terminal. Touts will try to grab visitors and take them across to unmarked vehicles – these may, of course, be perfectly safe, but not necessarily cheap. Go with the trusted, legal taxi drivers.

Try not to pack your expectations, take this lovely old city as it comes.

The people were all very friendly and the atmosphere pleasant – though our 12-year-old was a bit stunned that some local lads were taking the odd photo of her as we walked around the square! Not that we like the idea of our daughter/s being photographed randomly by lads either.

This was a long flight overall and one I would not repeat possibly, but the experience was worth it. At the end of any long-haul flight, one tends to feel somewhat disheveled anyway and I don’t think we felt any the worse for the extra hours involved!

Enjoy all your travels!!