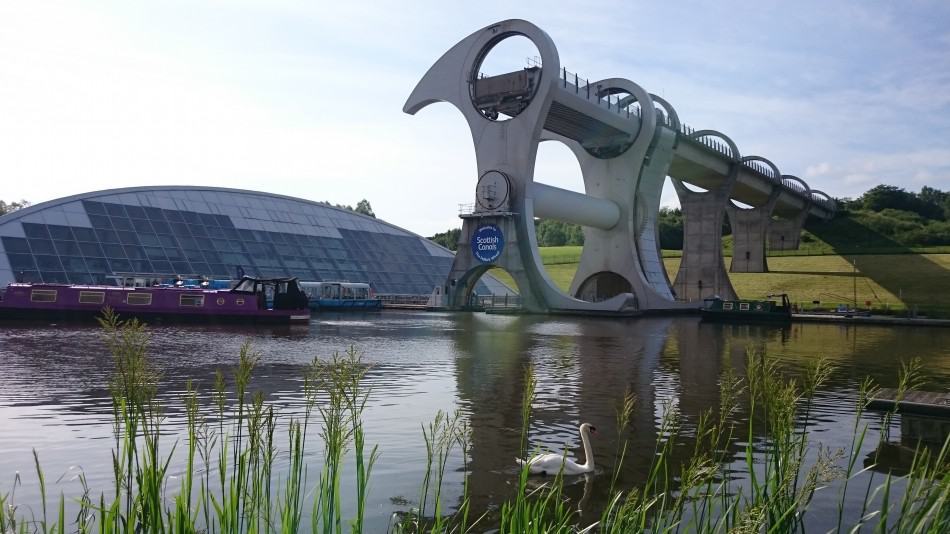 The Scots are well-known for being leaders when it comes to inventions and design over the centuries, they have a lot to brag about.

‘Scotland’s most exciting example of 21st Century engineering, The Falkirk Wheel, is more than just the World’s first rotating boat lift. It is a symbol celebrating the dawn of Britain’s new canal age’.

The Falkirk wheel ingeniously transports boats between two canals of differing heights. The design is likened to a double-headed Celtic ax, deceptively simple in appearance.

As the wheel turns, water and boats – contained in two gondolas – are moved between a man-made aqueduct, which is linked to the upper Union Canal, and a holding area  linked to the Forth and Clyde Canal. A drop of 25 metres.

The Falkirk Wheel has re-connected the two major lowland canals after a 70-year gap. The area, neglected for decades until this ambitious scheme was conceived by Scottish Canals in the 1990s.

Designed by Tony Kettle, an award winning Scottish artichect who has worldwide recognition for his designs.

A parking area up above the Falkirk Wheel provided an ideal overnight spot. There is a small charge for the privilege of the best views to be had, well worth it too. Seeing this huge construction in operation is definitely something to add to a bucket list of Scotland.

Computer controlled motors raise or lower 500 tonnes of boats and water, including a tourist boat that visitors can board to enjoy the ride too.

Up to four boats at a time can be sealed into each gondola behind a pair of flap gates, each trip takes about 5 minutes with an overall time of 15 minutes from loading to unloading.  Both gondolas weigh 50 tonnes alone, with 250 tonnes of water and boats. They are perfectly balanced, even if they do not contain the same number of boats. The weight of the water that is displaced as a boat enters, is the same as the weight of the boat. Each half turn of the wheel uses only 1.5kW hours of electricity, about the same as boiling 8 kettles of water.

Prior to the Falkirk Wheel coming onto the scene, 11 canals locks needed to be negotiated. Even this was no longer possible when the area fell into disrepair over seven decades.

Good on the Scots for adding yet another ingenious invention to their portfolio!

In the past decade, since the opening of the wheel in 2002, improvements have continued and an interactive water play area for kids is not to be missed.

Over 1800 years ago, well before the canals and the Falkirk Wheel, the Romans were in this area.

Following a short path from the Wheel, visitors can see fields and woodlands containing the remains of the Roman Antonine Wall and one of its defensive forts, known as Rough Castle.

Another nearby attraction, not to be missed, is the Kelpies Horse sculptures.

Where is the Falkirk Wheel?

Where to Stay near the Falkirk Wheel

We camped in our caravan in the top parking area of the Falkirk Wheel attraction, along with a number of other travelers. It provided a superb vantage point and the chance to see the wheel lit up at night. During our travels in winter with the caravan and around Scotland, we found plenty of wonderful places to stay for free as well as low coast, occasionally we splurged on an upmarket caravan park and had a few favorites we’d happily return to.