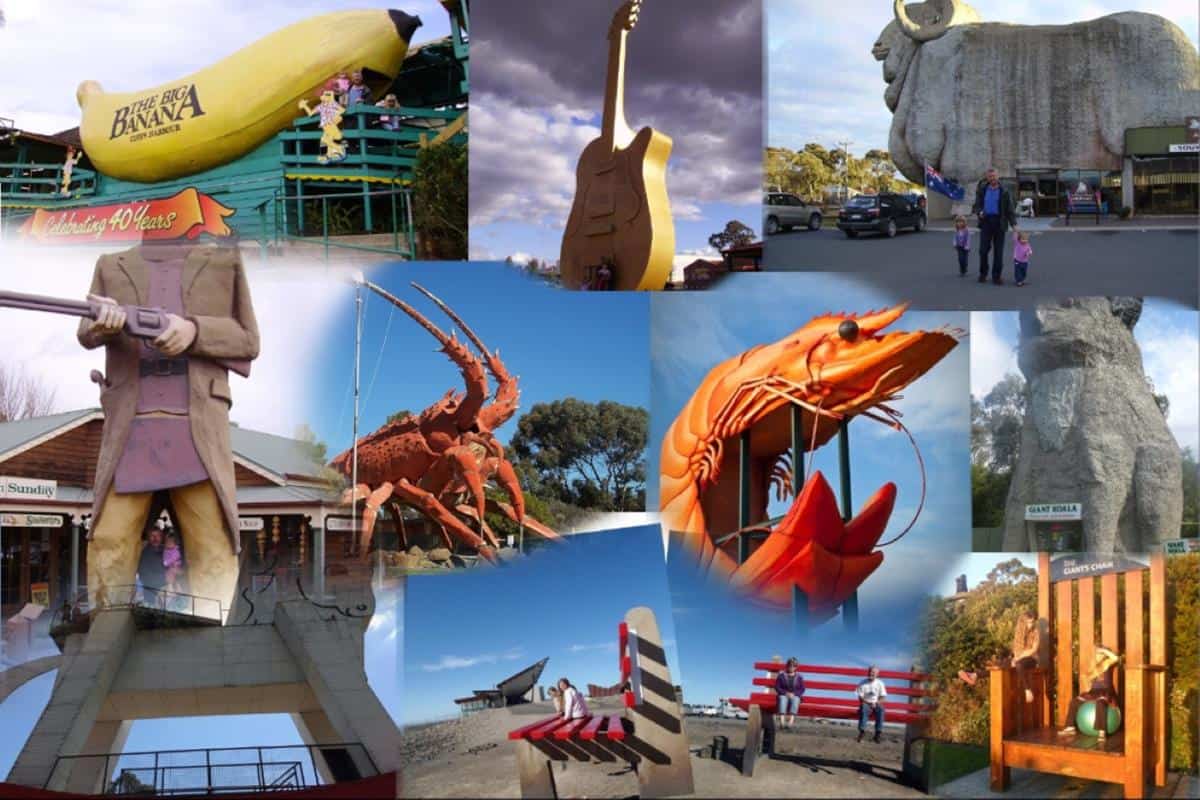 We seem to love our Big Things in Australia!

All in the name of a good laugh and a bit of promotion. Giant crustaceans, massive fruit, big toys and huge guitars… find them on a drive around the country. Here is our checklist of go-sees when it comes to big things in Australia!

Redz Australia has a great blog post about the Big Prawn and its near-death experience. It has been a Ballina icon since the late 1980s and was in danger of being tossed aside like a piece of rubbish until saved at the last moment…phew.

Larry the Lobster, circa 1979, is another Aussie Crustacean Icon who fell into disrepair and was almost sent to the scrap heap. Saving Larry became a focal point with plenty of media attention and public outcry.

The big sheep! Goulburn, New South Wales – home to the big Merino which was built in 1985 as a tribute to the fine wool industry of the area. Climb up through the sheep’s innards and peek out of his eyeballs!

I love the fuzzy ears on the Big Koala, it is right beside the road and houses a tourist information center inside. We visited the big Koala on our way to Uluru and Central Australia as well as on a trip to the Flinders Ranges.

Combining a restaurant, animal park, and toy shop, the complex is a big drawcard for families. There is a small charge to climb the biggest rocking horse you are ever likely to see.

Built in 1981 it weighs 25 tonnes and stands at 18.3 meters. Earlier creations were not quite as jaw-dropping as the big rocking horse that now stands proudly by the toy factory.

By the way, luckily, the big rocking horse does not actually rock!

Tamworth – Australia’s Country & Western Music capital! Home of the Big Golden Guitar. Unveiled by “Australia’s King of Country Music’ Slim Dusty in 1988. 12 meters high, weighing half a tonne. There is a museum to visit as well as a  cafe and souvenirs…

Tamworth was a diversion worth doing on our East Coast Australia road trip.

Proudly gracing the top of a massive slag heap, the Big Park Bench is possibly not the most comfortable spot to relax – but it is one of the biggest benches you may ever sit upon. Broken Hill is an old silver mining town in New South Wales. It’s almost considered the Outback of Australia as it’s on the very edge.

Ah, the Big Banana! Somewhere the kids all generally love to visit. Visible from the main road as you drive through beautiful Coffs Harbour, the Big Banana is a tourist mecca with a fun park, cafe, and souvenir shop as well as guided visits to the banana plantation.

Ned Kelly is a bit of a legend in Australia. A Bushranger and generally, naughty boy. Stand proudly by Ned on the main street of Glenrowan in Northern Victoria, visit the local museum to learn more about the life and times of Ned Kelly and his mates.

While you are visiting Ned, stop in at the ‘out-house’ on the main street and see the biggest Red-Back spider to be found! no doubt inspired by the Aussie song – ‘Red Back spider on the Toilet Seat’!

The list of ‘Australia’s Big Things’ is almost endless. More are scattered around the countryside and may well be added to this page… another time…